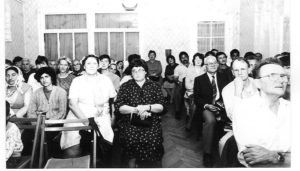 “I NEW THAT YOU WOULD COME” …meaning, this author, picture below HEBREWHERITAGECHANNEL FOUNDER/CEO

As I spoke Budimer listened intently; knowing he had heard from God; and the still small voice who had told him I would come; was speaking in front of him in his church.

By Vision sent to Macedonia …come to Eastern Europe.

That is all there was; within me, those few words; which within A month opened the way to the Balkans; at a time when the country faced be caught in the middle of the Serbian War era, 1994.